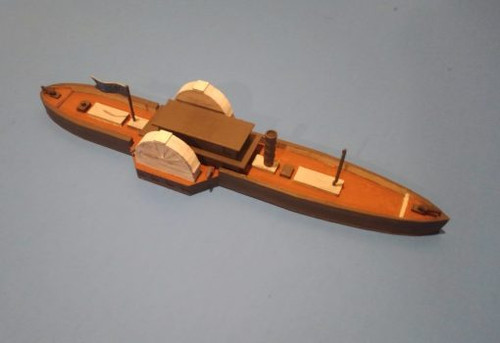 On April 11, 1862, Jamestown, Virginia and five other Confederate ships sailed from Norfolk, Virginia, into Hampton Roads in full view of the Union squadron there. When it became clear that the Federal ships were not going to attack, Jamestown, covered by Virginia and the others, moved in, captured three merchant ships, and helped by CSS Raleigh, towed them to Norfolk. The merchant ships were the brigs Marcus of Stockton, NJ and Sabout of Providence, RI and the schooner Catherine T. Dix of Accomac County, VA. Their flags were hoisted “Union-side down” to taunt the Federals into fighting. Later that month Jamestown was despatched from Norfolk to cooperate with Major General John B. Magruder, CSA, in the James River, and early in May she was used to transport army sick and wounded to Richmond, Virginia.

On the night of May 5, Jamestown and Patrick Henry proceeded to Norfolk and returned the following night with CSS Richmond, CSS Hampton and ordnance store boats, passing the Federal battery at Newport News, Virginia unobserved on both occasions. A second attempt to return to Norfolk met with failure.

On May 8, Jamestown was ordered to notify Stephen Mallory, Secretary of the Confederate States Navy, of the continuing engagement of two Federal gunboats and ironclad USS Galena with the Confederate batteries at Day’s Point. Unable to carry out her assignment, Jamestown retired up the James River as far as Drewry’s Bluff, where on May 15, 1862, she was sunk to obstruct the channel.